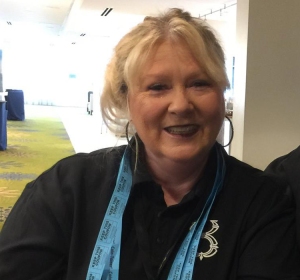 Despite having served as producer for Ultima Online since 2012 with Broadsword Online Games, Bonnie Armstrong’s introduction to UO occurred in 1997 when she entered Britannia as just another player. But soon, an opportunity to join an external testing team would change everything for her.

Following EA’s closure of Origin Systems in 2004, Armstrong was offered a full time job as lead QA tester for a 10-person team. But rather than relocate to San Francisco, Armstrong was approved to work remotely from her home in San Diego, California.

That all changed in 2006 when EA handed the reins to UO over to Herndon, Virginia-based Mythic Entertainment. Armstrong was informed that if she wanted to remain on staff, she’d have to leave sunny San Diego and head east.

“It was a big decision to move,” Armstrong said. “I had to talk my husband into moving away from a state he was born and raised in. And let’s face it, moving from California—where we never had a heavy coat and never turned on a heater—to a state that was freezing and snowed was a huge change.

“We figured if we sold our house in California, then we were meant to make the move. Since we sold it to the second person that came to see the house, we assumed it was time for a change.”

But despite having to face four seasons and the idea of winter coats, the cross country move earned Armstrong a promotion to assistant development manager. Even though she was working with an entirely new company, Armstrong said she felt welcome at Mythic from day one.

“The main thing that I observed is that everyone always seemed to work for the same goal, to make UO great,” she said.