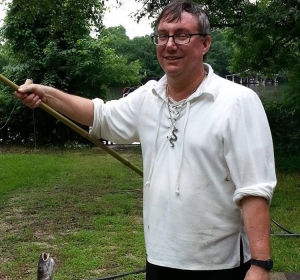 As a longtime fan of the Ultima roleplaying games, Jerry Thompson and his wife were ecstatic when they read the announcement of a multiplayer installment of the series. Eager with anticipation, the Thompsons joined an online guild called “The Band” and prepared to brave Britannia alongside adventurers from across the world. Little did the Thompsons know that their little online community would ultimately create PaxLair, one of the most successful and influential player-run communities in Ultima Online’s storied history.

Once the UO beta test was announced, the Thompsons sent Origin Systems their five bucks in exchange for the client disk, and returned to the land of Britannia. Eager to join other excited members of The Band—the guild’s membership consisting of players across the USA, England, Germany, Israel, and more—the San Antonio, Texas-based couple met their friends’ avatars on the Atlantic server.

“Our first adventures were simply going out exploring and killing things,” Thompson said. “We had to learn spells, weapons, tactics, and the locations on the map. We wandered around, meeting each other, hanging out in a pub that we just found, giving away new gear or excess loot, and trying out the different dungeons. Most things were spontaneous.”

Finding Atlantic to be overcrowded, and eager to leave its mark on the world, The Band sought out fresh lands. The Chesapeake server opened just three months following UO’s commercial release to help accommodate the influx in players. Those willing to start, or restart, on the server could take advantage of its fresh economy and open land. The new server suited The Band’s needs perfectly.

“Chesapeake equals community,” Thompson said. “I think many of the people who moved to Chessie were interested in housing and thus, in many respects, community-building. There was a good PvP crowd and even some roleplaying PvP guilds. As a roleplayer, I was interested in immersion and community.”

Hoping to create a safe haven in the wilderness where like-minded players could find one another, The Band founded a city that would uphold the guild’s tenets of peace, neutrality, respect, and roleplaying. Finding the perfect spot for such a city in a meadow east of Yew and northwest of the Shrine of Compassion, The Band guild member “WildMike” dropped a large forge in the clearing on January 19, 1998.

Just like that, the new player-run city had its roots.