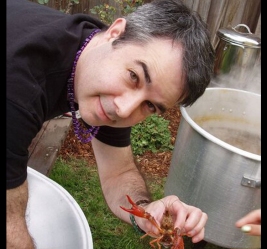 Michael Pusateri came into Ultima Online with justice flowing through his veins. Always one to stand up for the “little guy,” Pusateri became an ardent anti-PK on the servers of Sonoma and Siege Perilous, fighting a never-ending battle against evil.

The road from Vesper bifurcated, with one branch heading to Britain, the other toward Yew. This area became known as “The Crossroads,” and served as an epicenter of constant danger. By being a hotspot for travelers who couldn’t simply teleport around the world with the help of magical incantations, it also drew players with murderous intent. It was near The Crossroads that Pusateri had his first encounters with Player Killers.

“At first, I was nervous and would run at the first sight of them,” Pusateri said. “Later, I would fight with my ax or pick, or whatever, not really understanding the combat mechanics.  But after a while, seeing others fight back against the PKs, I became more interested in the anti-Player Killer gameplay.”

Soon, crafting armor and weapons took a back seat to Pusateri’s focus on strengthening and perfecting his combat abilities.